SevenAtoms was able to quickly scale its content pipeline to accommodate the large amount of articles that Rocket Lawyer needed. In order to maintain the quality level, consistency and authority of articles at high volume, SevenAtoms employed several new strategic processes. It introduced new layers in its approach to content creation to ensure the accuracy of the information provided in the articles and eliminate mistakes. A specific style guide was created for the writing team and an editorial process was put in place in order to ensure that all content was original, well written, and was consistent with the rules set down in the style guide.

A lack of conversions and poor ROI are common problems for many B2B PPC campaigns. In most cases, this is due to poorly structured campaigns without a disciplined management process. Revecent, a client specializing in sales recruiting, was suffering from these exact issues. Just take a look at their conversion rate and cost per conversion:

While a 2.83% conversion isn’t terrible for a B2B campaign, it’s also not much to be proud of. Plus, their cost per conversion was very high considering it wasn’t producing quality leads. After our initial overview of their campaign tactics, we narrowed our plan of action to face four key issues:

For the first segment of this PPC case study, let’s examine the issues in more detail…

Before we came along, Revecent had been using only three ad groups, each with 40 to 50 keywords—that’s way too many. Because of this, their quality scores were suffering as was their message match between their ads and their keywords. Take a look at this ad and all the keywords used to trigger it: 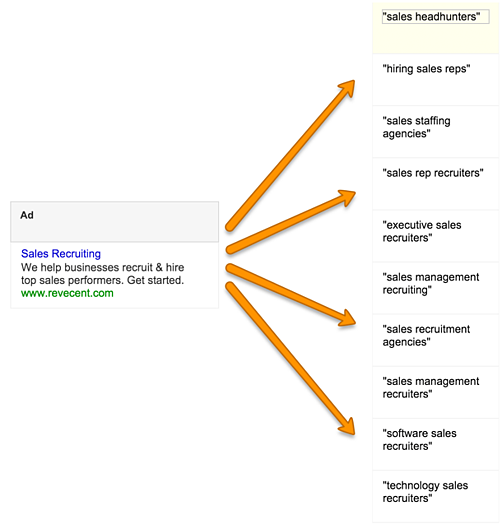 With this many keywords, it’s impossible that Revecent’s ads would be able to be relevant to each of them. As a general best practice, you should always aim to have an ad group to keyword ratio of 1:1 for all keywords that drive at least 80% of your campaign’s traffic.

2. A lack of targeted landing pages

Pointing to service pages or a homepage instead of a landing page is a big but widely made mistake. There are many reasons for this, but mainly it means that your ads will not match with the destination, which can deter to leads. Take a look at the services page below that Revecent had been using as their landing page. There are several issues at play here, including conflicting CTAs, navigation links, and poor content and design: The way their campaigns were set up was extremely inefficient. In fact, just 10% of their keywords lead to conversions, and 90% of those conversions used up 30% of their total ad spend.

Instead of using niche and long tail keywords, the keywords the client was using in their campaigns were all very generic and high-level. Additionally, they did not have any keywords for specific job positions or industries, nor did they use any geographic keywords. This resulted in very generic ads that were not customized to search queries, which led to poor campaign performance.

Finally, Revecent was also not making proper use of negative keywords. While they had implemented a few, they weren’t monitoring search terms for new negative keyword opportunities. This is a practice that should be weekly or bi-weekly in order to maintain quality traffic.

Our plan of action to improve their PPC campaign was made up of three important initiatives:  (1) Implement the most efficient structure for the account, (2) Design and implement optimized landing pages (3) create a disciplined process for managing the campaign that results in ongoing improvements.

Our first step was to learn the ins and outs of the client’s business. We began by evaluating their services, their target audience, the industries they serve, and their competitors.

We started by conducting thorough research using the Google Keywords tool and identified the most suitable keywords for their campaign. The best keywords we found were niche keywords for specific industries, including SaaS and technology. Additionally, we used geographical keywords for metropolitan areas like San Francisco, Chicago, and New York City.

After evaluating the report from their old campaigns, we identified some excellent new negative and regular keywords. We also implemented some keywords we found using SpyFu, a tool that allows you to peek at your competitor’s keywords. Then, it was time to develop a solid account structure.

All keywords that accounted for at least 90% of expected traffic were placed in single-keyword ad groups (SKAGs). In the end, this resulted in 80 ad groups. Using this many SKAGs allowed us to gain more control over the campaigns, which also meant that we were able to perfect our message match between ads and keywords. In theory, this would lead to higher quality scores and click-through rates, while maintaining a reasonable keyword cost per click. Check out the three ad groups below:

In addition to rewriting all the ad copy in order to accurately convey Revecent’s basic objectives and benefits, we also added call ad extensions, callouts, and sitelinks. Lastly, we included numerous negative keywords per ad group in order to ensure that each keyword searched on Google would only lead to one ad group.

We created new, conversion optimized landing pages and made sure the content was in alignment with the ad copy. Rather than creating a number of landing pages with custom content for each of the many ad groups, we used dynamic text replacement. This means we could use the same landing page and the headline, subheading, and other key areas would be customized based on the viewers search inquiry.

Campaigns should always be A/B tested to ensure that they are performing to their best ability. In this case, our A/B testing proved that the adjustments we made were outperforming the old campaign by a lanslide. However, there were still a few adjustments necessary.

After analyzing the new campaign, we discovered it was receiving a lot of irrelevant traffic from people searching for services that Revecent does not provide, such as IT recruiting. Additionally, there were a number of unrelated searches for recruiting in other industries like medical and pharmaceutical sales. In order to combat this, we added these to our negative keywords: However, we also found that people were searching for a lot of relevant keywords that we hadn’t included. In order to maximize the campaign’s effectiveness, we added these keywords into new ad groups:

For each of the ad groups receiving the most traffic, we began with two ad groups. After some close monitoring and A/B testing, we decided upon a winner. We then used that ad to craft another version, tested this against the original, and continued this process in order to achieve the best click-through rates.

Additionally, we created different versions of the landing page, CTAs, and headlines: We chose to implement a manual CPC bid strategy as it gave us the most control. And, in order to achieve and maintain the top three position for the majority of the ads, we closely monitored our bids and regularly optimized them.

The client’s main objective was to minimize job candidate leads. Additionally, they specified that they did not want to receive any leads from companies who were only looking for part-time or commission-only salespeople.

Because most of the leads specified exactly what they were looking for in the form on the landing page, the client was able to sift through and contact only those that were most relevant to their needs. We also modified our ad copy and paused certain keywords in order to deter these unwanted leads.

Our new campaign performed remarkably well—just take a look at the table below to see the huge difference in the cost-per-conversion and the conversion rate:

From all the adjustments we made, we were able to:

As evidenced from this PPC case study, our efforts created a stable and scalable platform for sustainable growth. Our results were a product of highly granular campaign structure, customized landing pages, and a disciplined process for ongoing optimization. While it took a lot of time and effort to create the original campaign structure, the payoff certainly outweighed the effort.

GET PROPOSAL
Scroll to Top